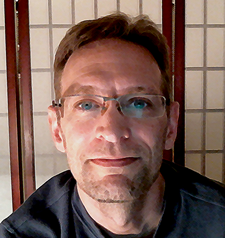 Your host and principal coding monkey

Constellation Design is a predominantly one-man graphic design, production, and coding studio in the Emerald City of Seattle, Washington. Though the royal “we” is used throughout the site—and the literal “we” is from time to time accurate when circumstances permit—mostly when work is done by Constellation Design it’s done by your’s truly. Having majored in studio art in college and been an early student of the Internet, I cut my teeth, as they say, on Website coding when no one had ever heard of “Google” or a “dot-com.” From humble beginnings designing and producing simple Websites for friends-of-friends, I went to work at Microsoft as an editorial quality-control drone; before long it was discovered I had coding skills too and I was drafted into code-control as well. Freelancing while at Microsoft on the local sports magazine The Grand Salami, I learned the ins and outs of print production while producing page layouts and graphic content. By the turn of the century I moved on from corporate employ and “went pro,” finally establishing this company in 2002. Since then Constellation Design has added a number of clients and produced a respected portfolio of work.

What's in a Name?

The name Constellation has its roots in a couple of things. My love of many things science-fictional and astronomical, to be sure, but also in the subtle influence of a university professor. When I was in school at the University of Arizona (a fine institution for astronomers, by the way), I took an Intro to Astronomy course from Dr. Christopher Impey, who was not only a tremendous instructor, but easily the most fun and humorous of all my college professors. “Impy” would wear Marx Brothers T-shirts to class and borrow lines from Steve Martin and hide them in his midterms, and one time displayed an overhead transparency of the Northern Hemisphere constellations—with the lines connecting the stars in new places. He captioned this image “If the constellations had been named today,” and suddenly our familiar star formations were no longer Orion the Hunter and The Big Dipper, but The Hair Dryer and The Sony Walkman. It stuck with me, not just ’cause it was funny, but because it illustrates that design is all in the eye of the beholder. The stars have looked the same up there for millennia, but where one person might see Leo the Lion another might see a cricket bat.

We’re all working with the same raw materials in the design world—nifty computer software, color theory, paper stocks, Internet browsers—but no two designers will come up with the same result. We each have our own eye for things...even the stars.